Areas of this website may be unavailable through July 11 due to routine maintenance. Please check back.

"Maintaining Sunriver as a premier residential
and resort community, protecting and enhancing its quality of life,
natural environment and property values." 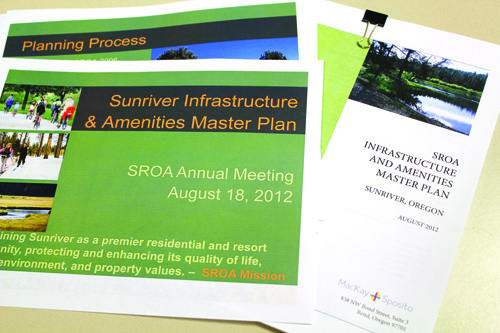 The Infrastructure & Amenities Master Plan (IAMP) is a living document that culminated from years of owner surveys, data gathering, trends and input by consultants to look at the present – as well as the future – related to amenities and/or infrastructure needs within the Sunriver community.

Implemented or Work in Progress Projects as a Result of the Original IAMP Plan:

The 12-member task force – comprised of both owners and SROA staff – was established in August 2018 and was instructed to review the 2012 IAMP Master Plan, conduct a new survey of owners, review past comprehensive surveys, research trends and then prioritize all results and submit recommendations to the board of potential future infrastructure and amenity projects and/or improvements. Some projects have already been completed or are in progress (such as the North Pool).

After compiling all data to date, the task force report outlined the top amenity and infrastructure improvements.

Owners can read the full report and view the presentation provided to the board at the June board meeting.

Free viewers are required for some of the attached documents.
They can be downloaded by clicking on the icons below.