During World War II, the government purchased 5,500 acres where Sunriver sits today and built an

Army Corps of Engineers combat training facility. A self-contained city, Camp Abbot contained roads, water/sewer facilities and enough housing to sustain up to 10,000 soldiers at a time between 1942 and 1943.

The camp was decommissioned and closed by 1944 and most of the buildings were torn down. At the time Camp Abbot was demolished there was no EPA or DEQ oversight and some of the building debris was buried on site. It was later discovered that some of those building materials contained asbestos.

Asbestos containing materials, or ACM, have been found and continue to work their way to the surface at several locations within Sunriver. The surface materials on commons are cleaned up annually as required by the Department of Environmental Quality.

If you have questions about asbestos in Sunriver, contact SROA's Natural Resources at 541-593-1522.

There is the possibility that munition materials remain buried in the ground and could be discovered during projects such as home remodels, when digging to install pipes or landscaping, road/pathway work, etc.

Should you or a contractor stumble upon possible munitions, do not touch or move the object and call 911 immediately.

The US Army may send periodic letters to properties located in or near areas where munitions were used. The US Army has provided a brochure with information.

You may also call the Formerly Used Defense Site information center toll-free: 1-855-765-3837 or visit their website at www.fuds.mil 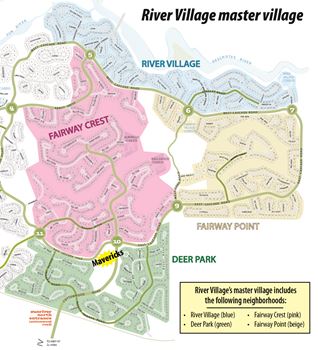 The property is now Sunriver Fitness and Aquatics. In the interim, Myers continues to make contact with and notify owners within the River Village Master Village to agree to changing the language of the village declarations (CC&Rs) to include “assisted living facility” as allowed usage of that property.

Myers has proposed turning the site into an assisted living facility, which is not a permitted use of the property under the current CC&Rs. The property is located within the River Village Master Village, which includes 2,000 properties within Deer Park, Fairway Crest, Fairway Point and River Village.

The River Village Master Village has its own set of declarations independent from the bylaws, rules and regulations and consolidated plan of the Sunriver Owners Association. Any change to the CC&Rs requires 75 percent of the owners within those villages to agree to any language modification.

Any questions specific to the proposed plans being contemplated should be directed to Myers at: sunriverassistedlivingproject@gmail.com or 503-961-5009.

Free viewers are required for some of the attached documents.
They can be downloaded by clicking on the icons below.